10 Jan 2015: Thrifty or lavish, we all are now guests at the discounted, buy-one-get-one-free, year-round cheap food feast, eating more than we need and paying less for it – as a proportion of our incomes – than our grandparents did, or their parents before them. This, it turns out, is not entirely a good thing. 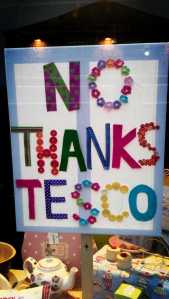 Extended version of my story  “Tesco, not in our backyard”,  published in the Times 19 March 2013.  Comments below.

The lady from Tesco is having a horrible day. She’s driven from Bristol – leaving a sick toddler behind – to the little Dorset town of Sherborne where, frankly, almost everybody hates her. Her job is to sell the idea of a new Tesco store to a community that doesn’t want it, at a time when Tesco – according to a recent Which? magazine-  is by far the most unpopular supermarket in Britain. And the survey was done was before horseburgergate.

They don’t look aggressive, the townsfolk who’ve marched up the famously charming high street to Digby Hall, where Tesco is staging a presentation, “Investing in Sherborne”. There’s a preponderance of tweed and country jacket green; some dreadlocks but more trim hair-dos. The protest posters are decorous against the honey-coloured stone – there’s a “No Thanks Tesco” made of buttons and embroidery in Tesco colours. The rudest slogan asks the supermarket chain to “burger off”. “It’s just like Les Miserables,” someone laughs – but it is actually a very English affair.

There is a TV crew and local celebrities: Valerie Singleton, journalist, once of Blue Peter, and Canon Eric Woods, vicar of Sherborne Abbey. He is impressive in red-buttoned, ankle-length black robes. He says that Tesco is just wrong for a town like Sherborne, and won’t do any good. “You’d be amazed at this stereotype of supermarkets being cheaper. It’s just not true. Our local butcher is cheaper: I should know, on a parson’s stipend you have got to be canny.” Most of the attention goes to the anti-Tesco pony, a live one, led by a former BBC journalist. 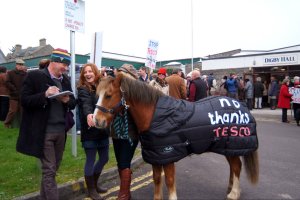 END_OF_DOCUMENT_TOKEN_TO_BE_REPLACED

Editorial I wrote for the Observer

Sunday 13 January 2013 The world is throwing away a shocking amount of food. A report last week claimed that at least a third of the 4 billion tonnes of food the world produces each year never gets as far as our mouths. Between 30% and 50% of food purchased in Europe and the US is thrown away. The research is questioned, not least by the supermarkets, but it does echo the results of an exercise in Britain six years ago, when researchers for the government-funded Waste and Resources Action Programme (Wrap) went through the nation’s rubbish bins. It concluded that we were throwing away 30% of the food we’d bought while it was still edible.

Britain – and much of the rich world – has got used to filling the fridge with what looks nice, not what it actually needs. The cost of that indulgence is, says the Institute of Mechanical Engineers, £10bn annually. Globally, the cost, in money, energy and ever-scarcer water, is unquantifiable.

Our future food security has been climbing the top 10 of current global worries. The prospect of feeding a mid-century planet of around 9 billion people looks impossible without major and potentially unattractive changes to farming and our diet. If you accept the United Nations Food and Agricultural Organisation’s call for production to be increased by 70% to feed the population of 2050, most of the work will be achieved just by being a bit more thrifty. All we have to do is to use better what is already there.

END_OF_DOCUMENT_TOKEN_TO_BE_REPLACED

Sainsbury’s believes you can, but when Alex Renton took up the challenge, he found his household of foodies and fussy eaters had serious misgivings.

Eighty-four meals, £50, one happy family, say the new Sainsbury’s adverts. They promise to feed a family of four for seven days for less than the price of a tank of petrol: “No really, it’s possible — we know because we’ve done the maths.” If they’d done that, I thought, we really should do the experiment. My happy family of four is very bad at doing the maths — we don’t have much of a clue what we spend on food even though we suffer the usual shrinking-income fears of the times. Feed each of us for £1.79 a day? I went straight down to Sainsbury’s.

Find the full article here on Times Online (in front of the paywall).