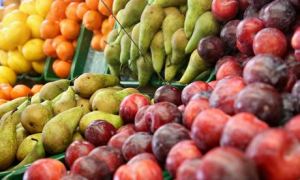 Actually, the fruit bit isn’t so great after all (Getty/Guardian)

6 April 2014: Published in the Observer, my piece on the “5 a day” debate got an amazing 900+ comments. Some of them quite well-tempered (must be something in the diet).

My children are apple-cheeked and glossy-haired, strong and slender as willow wands. Not a filling in their heads, either. All the same, we had a family council on diet last week. A study by the epidemiologists of University College, London found that the five-a-day diet is inadequate. Seven or even 10 portions of fruit and veg is more like it and might reduce our chances of early death by 42% or more. Odds worth having: so I asked them to audit their intake.

My daughter confessed that while she has a banana most breaks, she didn’t like the school lunch fruit salad. She is probably getting four a day, tops. My son said he easily ate five a day. You don’t count chips, I countered, because they are made from potatoes (he did know that) and a potato, being largely starch, does not make the NHS five-a-day lists. I think his score is perhaps three – as bad as mine.

Suddenly, I saw developmental disorders all around. The failure to learn Mandarin. The trouble with long division. The severe allergic reaction to the word “walk”. Might there be scurvy lurking there too? Rickets? And how the hell were we going to get up to seven a day? That’s 2,555 portions of fruit and veg a year for each of us, and we’d be living longer, too. Should we marry the kids to greengrocers?

You can’t move in middle-class Britain today for worrying foodies – it’s the cult of the era – but I doubt many were auditing their five-a-day last week, let alone considering upping their targets to seven. The scheme was dreamt up two decades ago, according to legend, by American fruit and veg companies. It now passes most of us by – as much as the admonitions to limit our TV watching or to take 20 minutes of aerobic exercise every day. Prescriptions from another world, not the real one.

Besides, we’re all sceptics about diet advice now. We’ve been cruelly misled often enough by diet advice from the government’s pulpit: my generation’s childhood sandwiches were ruined by trans-fat-laden margarines that did us more harm, it’s now acknowledged, than lovely butter ever could. Only Unilever’s shareholders benefited.
Does anyone actually eat five portions a day? The equivalent of five bananas, or 15 heaped tablespoons of peas? Most of us have clearly done fine on less. As things stand, only 30%, surveys say, make it to five. Given our notorious dishonesty when confronted by pollsters with questions that touch on our self-regard, that means there are not many more five-a-day eaters in Britain than there are vegetarians.

Canvassing friends (real and on Twitter) about five a day, the dominant reaction is contempt. “Patronising, unscientific nonsense” from a finger-wagging government that likes to harass consumers on food and health but fails to address the real villains: Big Sugar, fraudulent labelling, monopolising retailers. Five a day is a “great driver of food waste,” suggested Rob Lyons, a writer who fights a lonely battle against food/health nonsense. Think of the hordes of worrying-well filling fridges and fruit bowls with stuff no one wants to eat.

There’s truth in all that. We throw away two-thirds of the bagged salad we buy and nearly half the apples. Certainly, the food industry has played its part in making a simple, sensible guideline into something guilt-laden and highly profitable. Quite why Britvic is still able to peddle its sugar-laden, fibre-free (and absurdly expensive) Fruit Shoot drinks as part of “your 5-a-day” is unfathomable. (Note to parents: try tapwater.)

When the NHS launched 5 A Day in 2002, the industry insisted that, in return for its support, the lists must include processed foods and drinks, which is where the profit lies. So baked beans, canned soup and veg, non-potato crisps, dried and tinned fruit and even fruit-flavoured ice lollies are on the NHS’s lists of recommended five-a-day foods. “Better without sugar,” say the guidelines: but, outside health shops, tinned fruit usually comes in sugar syrup, and baked beans and soups are laden with it.

The portion sizes are designed to obfuscate. Did you know that you need two spears of broccoli to make one portion of five a day? (What’s a spear?) That a portion of veg is three heaped tablespoons of peas and beans or eight cauliflower florets? As for fruitcake, it should be only 150g and contain 50% fruit, which few commercial cakes do.

“Always read the label,” says the NHS Live Well site, where five a day’s rules are laid out. In a world where the average time spent studying a supermarket shelf for the item you need is just four seconds, this is plainly Not Going To Happen.

If the state must nanny, the rules must be logical and simple. Then it needs to police the business sector. That doesn’t happen. The Advertising Standards Authority generally takes a year or more to rule on misleading statements. And manufacturers take advantage. Recently, I tried to challenge a brand of cherry juice sold in most supermarkets on its outrageous claims – including that one glass “contains the health benefits of around 20 portions of fruit and vegetables“. I got no response, from the company, from its PR agency or from Waitrose.

Even food writers – God forbid! – are capable of utter nonsense in the cause of promoting five a day. On a popular website that boasts “Smart women click here!”, I found advice from “fat loss specialist” Dave Fletcher. “Slip lemon segments into your water or herbal tea to refresh your drink and help you digest fat… Then to boost your five a day, eat the lemon afterwards.”

Five a day has some sensible defenders. They say that the fact that it is not scientifically based is unimportant – the campaigns have, at least, put a useful notion of balanced diet and the importance of fresh, non-meat foods into the public mind. That may be, but it has been a blunt tool that may have forced lots of hard-up parents into buying fruit their children did not need. (In Australia, wisely, the line is: five veg, two fruit.)

But as scientific research on disease and diet matures, it becomes increasingly clear that making sure you eat these things isn’t good enough. Fibre and vitamin C, and the minerals and micro-nutrients in uncooked fruit and veg, are certainly a plus. (When you boil the veg, most of them are lost with the water.) But the benefits of antioxidants, the “superfruit” miracle ingredient of this decade, are still far from proved.

Today, other rules are more apposite. Don’t trust food retail. Buy cheap beef and you will end up eating knackered Romanian horses. Don’t trust “healthy” or “natural” on a label – they do not mean anything any more. Remember that all sugar, not just “added”, causes obesity and diabetes, and is everywhere: in mayonnaise, in “healthy” ready-made meals, in fruit juices. Eat fish, especially oily ones, at least twice a week. And: cut back the meat. Colorectal cancer is now in the top three potentially lethal illnesses in the rich world, and it is proved that vegetarians and people who eat less red and processed meat are slightly less likely to develop it.

So what are we left with? The only ungainsayable dietary guidelines are simple to the point of gnomic. Professor David Colquhoun, an eminent toxicologist and scourge of bad science, also at UCL, once told me: “No dietary science other than ‘eat less’ has ever changed my eating habits.” Fundamentalist foodies like to quote Michael Pollan, the American guru of “real food”, whose most famous prescription is nearly a haiku: “Eat food. Not too much. Mostly plants.” (He also said “Don’t eat anything your grandmother wouldn’t recognise as food”, which is beguilingly simple, though my Scottish grandmother was happily cognisant of Irn-Bru and Cheesy Wotsits, tastes that I inherited.)

Wise saws such as these aren’t going to have much play with the NHS or the food industry. You can’t sell ready-meals with them. All the same, here’s mine: don’t eat crap. Three times a day. And try to cook something every day that makes you and those you love happy.